The wife and I acquitted ourselves respectably in our morning races.  No crashes, no flats, no mechanicals.  In the afternoon, the real show began.  Start of the women's elite race: 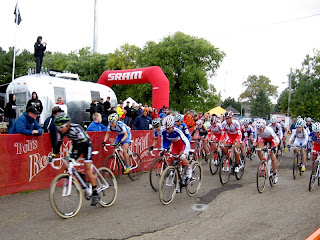 Katerina Nash was class of the field.  She got a gap, extended it, and then teammate Georgia Gould attacked the rest but never was in danger of bridging. 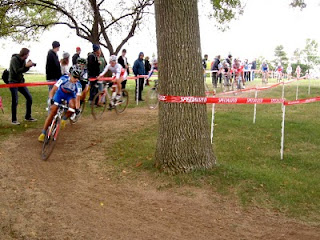 Bart Wellens warming up before the men's race: 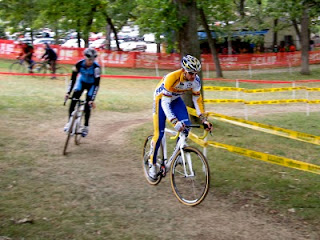 Jeremy Powers got the holeshot and bunnyhopped the barriers.  He looked awfully strong. 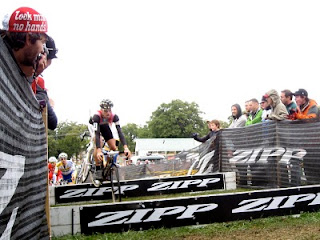 Someone getting a better shot of the barriers than me: 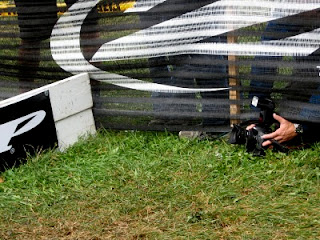 It ended up a three-way battle between Wellens, Powers, and Ryan Trebon.  Wellens' teammate Rob Peeters did a lot of work countering Powers' attacks and then dropped to the second group.  In the last lap, Powers faded, and Trebon just managed to hold off Wellens for the win.  Fantastic race, and a great victory for Trebon. 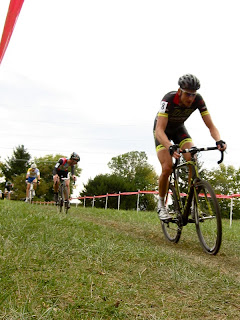 [HERE is a video clip of me taking the above photo.]

Due to a gnarly cold, a bout of Montezuma's revenge, a looming storm over the Midwest, and other factors, we decided to forgo Sunday's races and start driving south instead.  We missed a mudfest Wellens victory.  Alas.
Posted by arkansascyclocross at 5:04 PM