The 2012 Arkansas Super-Prestige (ASP) cyclocross points series will be contested over eight races in central and northwest Arkansas, running from October through December. Medals will be awarded three-deep in five race classes---Open, Women, Fours (USA Cycling CX category 4), Masters (40+), and Juniors (18-)---and the overall highest-scoring team will be awarded the Arkansas Cyclocross Cup. 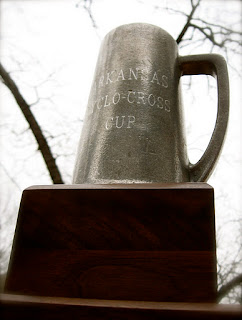 Cyclocross ("CX", "cross") is a 30- to 60-minute bicycle race covering a roughly one-mile closed circuit of mixed terrain including pavement, grass, gravel, and dirt. Racers are forced to dismount and portage their bikes over a variety of hurdles, log-piles, or steep ravines, earning the sport its reputation as "the steeplechase of cycling." Because of its unique challenges and spectator-friendly nature, cross is the fastest growing form of bike racing in the U.S.

The ASP season opens with a weekend of racing in Little Rock. On Saturday, October 13, the ASP Night Race takes over Kanis Park for fast and exciting racing under the lights, followed on Sunday with Reservoir Cross, over a tough, hilly, rocky circuit in Reservoir Park. The entire season is listed below.

Bookmark www.arkansascyclocross.com for the latest ASP news, a complete set of series rules, and ongoing coverage of the races.

Posted by arkansascyclocross at 5:18 AM